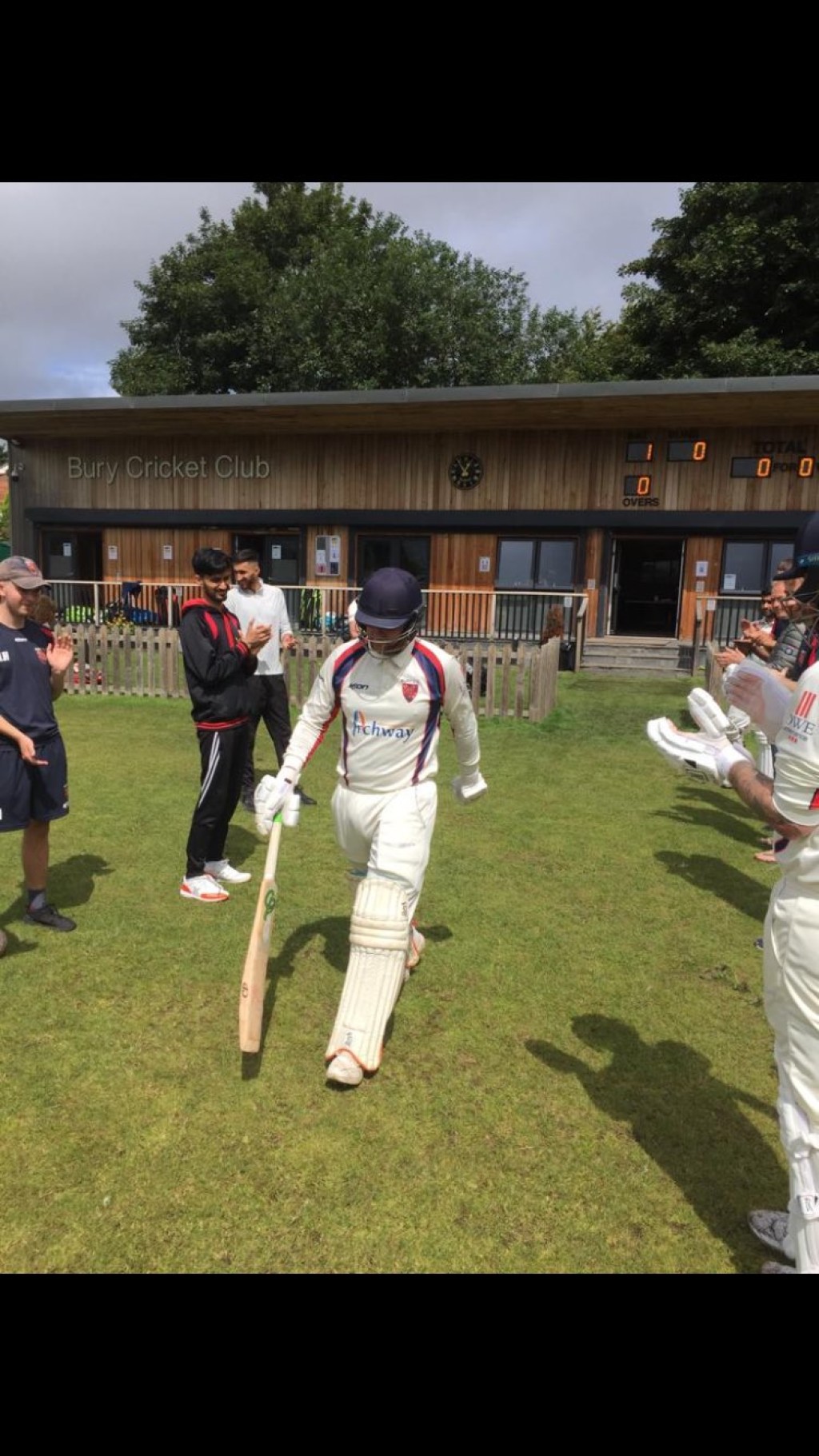 Weekend Round Up: Wiggy signs off with a win

It was three wins from four games over the weekend for the Radcliffe Road men, with wins for Bury Storm on Friday, and for the 1st and 2nd XIs on Saturday.

The weekend began early on a hot Friday evening at the Archway Oval, with neighbours East Lancs Millers the opposition in our second game of the 15 over competition, following a tight defeat to Walshaw two days earlier. Dom Morris continued his brilliant start to the season with another half century, 54 runs coming from just 29 balls. An unbeaten 20 from captain Gary Garner helped Storm upto 96-6 by the end of their 15 overs. The wickets were shared, with 2 each for Lee Halliwell, Majid Talib and Chris Potts, with East Lancs finishing 58 all out in the last over.

On Saturday, the 1st team made it two wins from two in their bid to top Group L in the Saturday 40 over competition, with a 52 run victory over Tottington St Johns. Jon Wiggans was given a guard of honour as he went out to open the batting in the first innings - his final competitive innings before retirement. It was former Bury man Matt Smalley who claimed his wicket for the last time, given lbw for 10. Number three Zafri Zafardeen scored 26 but Smalley's 6-22 wripped through the Bury middle and lower order as they collapsed from 87-3 to 106 all out.

However, much like last week, the run chase never got going for our opponents, with spinner Ahmed Matloob (10-6-17-4) opening the bowling and claiming the wicket of both Totty openers within his first 7 deliveries. Alex Breckin (10-4-14-3) was once again in the wickets, before Wiggans (2.1-1-1-2) was brought on to claim 2 wickets, including bowling Clive Brooks with the last ball of the match, and the last ball of his fine career.

In the reverse fixture, the 2nd XI won a tighter game to get their league campaign off to the best possible start, with a 3 wicket win at Crompton Meadows. The hosts batted first, and wickets fell at regular intervals with opener Michael Proops (40) the only man in the top 6 to make more than 12 before he was caught off the bowling of Usama Akram, with the score at this point 93-6. TSJ recovered well however, with only 2 more wickets falling, both to Chris Potts (10-1-22-4), as they finished their 40 overs on 162-8.

Joe Mitchell (12) was the first man to fall for Bury in the second innings, with a good take from Matthew Bradshaw off his own bowling. However, a 4th wicket partnership of 56 between Zain Khan and Usama Akram (33) swung the momentum back in Bury's favour, with the score upto 99-4 when Akram was caught and bowled by Kevin Hothersall. Small contributions from the lower order and Zain Khan's perseverance saw Bury over the line with 6 overs and 3 wickets to spare, with Khan finishing on 49* having batted through the whole innings.

On Sunday, the 3rd XI suffered a 47 run defeat in a high scoring game at the Archway Oval to Heaton. Having won the toss and batted first, Heaton's talented young team scored 198-9 from their 40 overs, with 7 batsmen reaching double figures, including 48 from Oliver Lightbrown. Arshad Raza (8-0-32-3) was once again the leading wicket taker, with braces for Zarqash Ali and Mohammed Usman.

After losing Raza early on, the Bury run chase started well, being at the required rate throughout the first 20 overs. Ghalib Sarosh scored a run-a-ball 27 and Hamza Hussain scored 46 from 49 balls before he was given out lbw. In the second half of the innings, momentum began to stall, and after the wickets of captain James Weston (24) and Joe Spencer (13), the required rate had become out of realistic reach. Zarqash Ali and Josh Bowen saw out the last couple of overs for the last wicket to ensure that Bury took one losing bonus point, finishing on 151-9.

This week, Bury Storm continue their GMCL15 campaign with a trip to Prestwich on Thursday, before the 2nds host Unsworth at the Archway Oval on Saturday, with no game for the first team. The 3rd XI travel to Heywood on Sunday.

Visit the Seniors page to view fixtures and results, with links to scorecards, match reports and league tables.

Report: Wins all round to round off July