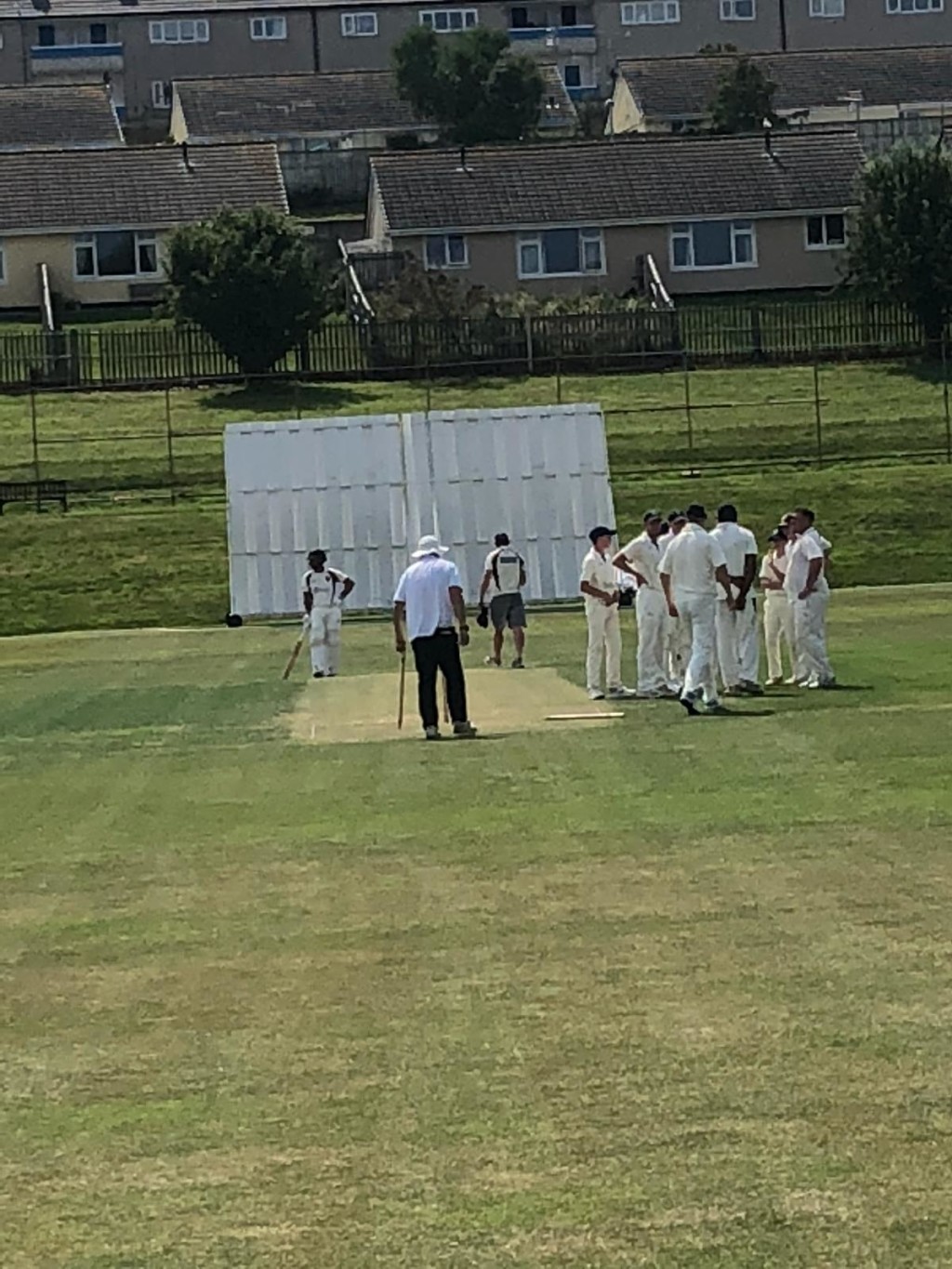 A heatwave extravaganza awaited tourists and supporters for their final game at the picturesque ground of Colwyn Bay , what they hadn't bargained for was Bury's own version of slap stick comedy , produced at a pivotal point in the game and late in the day .

With Sam Holt making his tour debut as skipper for the day the scene was set we were invited to bat as usual in case the stragglers were still feasting on Galloways fish and chips.

With various team members rested it was up to the tried and tested opening partnership of Joe and Vik , Joe didn't disappoint and fell victim to one " that would of got a test batsman out " or so stand in umpire wiggy claimed , onlookers seemed to favour unofficial scores @bury version and Joe was left to study further, London's underground tube map on his way home.

Vik and Milton did what they've done all tour and rebuilding job was in order getting good value for anything they could get wide of the fielder as it raced to the boundary and it was quickly apparent a score of 200 plus may be needed. Milton raced to double figures and then met the strange same fate he has found himself in on more than one occasion on a Saturday,  looking round to find his stumps needed rearranging. In strode Ben and carried on where he left off last night and determined not to have to worry about playing at home for another week or two and was in full holiday mood ,enjoying what was a very good wicket to score runs on . Vik was now in full flow and thinking he was back home where the ball bounced and helped himself to another 50 plus , Ben followed suit to a well crafted half century before he fell to a Josh Bowen full flighted lookalike ball.

Skipper Sam H got into the action straight away piling on the pressure Vik fell late on but not before he had constructed a well deserved 80 for the score book . 232 was the eventual target.

A form of reverse batting order from the hosts had them in all sorts of trouble and pottys managed to help himself to a hat trick and sent the hierarchy searching the archives. At 58/4 skipper Holt must have been dreaming of his first win under his stewardship. In between Johansen was accumulating runs and played what was in the end a sublime innings . 8 an over at the 150/4 stage was still on and the game toed and froed, Milton snared another u12 to get the hosts 5 down , but this only seemed to spur Johansen on further with the best part of 40 needed of 3 and a bit Bury must have thought " nothing silly now" . With the punch and judy show having been aired earlier on the prom at 2pm surely nothing could compare . The time was 7pm and the matinee had arrived , up stepped our very own dumb and dumber,  best friends Sam Massey managed to palm over what was the easiest catch of the day - for a six !! and some two balls later Vik was left in ruins as Pottys snr went from hero to villain and he too managed somehow not be able to jump an inch and  palmed it over for the same result . Game on and so it proved , Milton was entrusted with the last over and just couldn't stem the flow Johansen had every corner of the ground covered and once the bowler had showed his hand manipulating most of his field to be leg side waiting for the leg side hoik the batter the last ball was bowled and he duly punched him through extra cover for a boundary. Tied Game 232  a very good spectacle for the onlookers of both sides , a very enjoyable game and a good advert of how it should be played, hard with mutual respect .

This brought to a close what was a very enjoyable stay in North Wales for all concerned long may it continue and be supported by all to make it what it is, a club tour for young and old. Special thanks to new tourists and debutants and not forgetting the in house minders / body carriers who managed to get subo home safely from three consecutive nights in wetherspoons, a feat in itself.

Weekend Round Up: Storm run Clifton close in thriller to end campaign

Weekend Round Up: Potts the star of the show at Gin Pit

Weekend Round Up: 1s and 2s continue perfect starts

Weekend Round Up: Three wins from three

Weekend Round Up: Wiggy signs off with a win