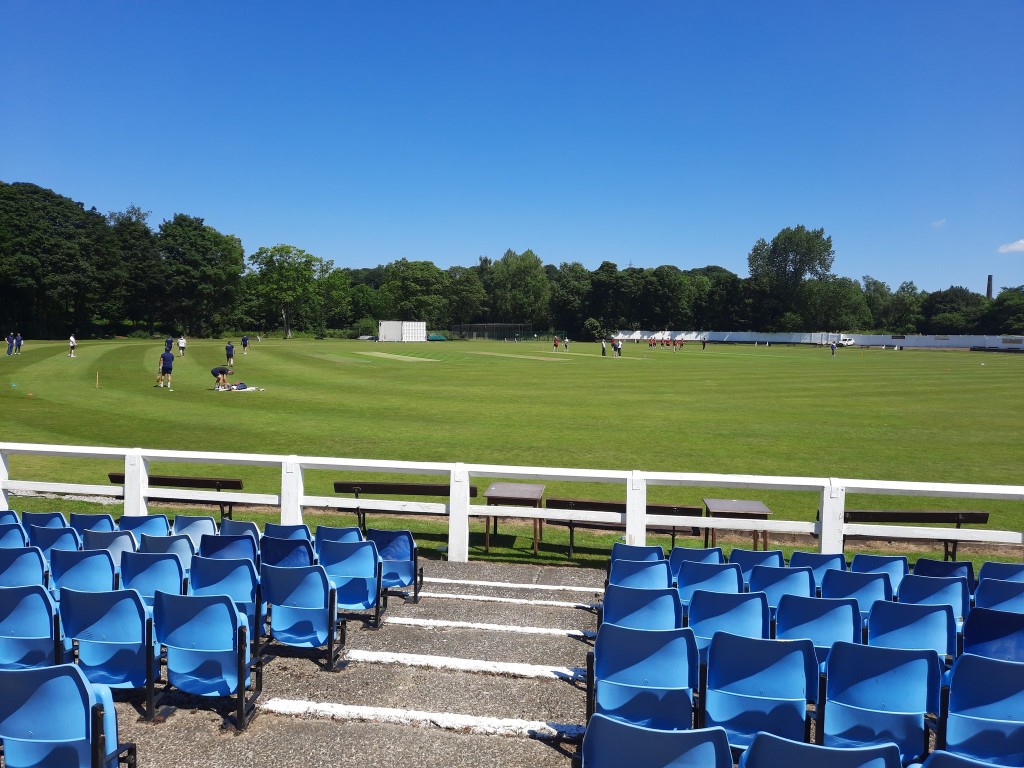 The 1st and 2nd teams both came home with the points after long days in the sun on the road.

The 1st team were in action at Heywood, looking to bounce back from 2 defeats in the last 2 weeks. Heywood's Caleb Grant put Bury right under pressure in the first over after Gary Garner won the toss and chose to bat, both Ben Gorton and Mukhtar Nasir out for no score in the first 6 balls. Ammar Baig and Dom Morris very patiently rebuilt the innings, and when Baig was bowled by Chris Humphreys (15-7-28-1) on 24, Alex Breckin joined Morris at the crease for a lengthy partnership. Dom reached 50 with his 110th ball, which included 3 big sixes on a big ground, and he was bowled for 63 with 10 overs to go, with 120 on the board. Alex Breckin and Ghalib Sarosh (20) pushed the runs well, Breckin got to his half century from 85 balls and finished with 63, and Bury managed 185/6 from their 50 overs.

Alex Breckin got the early big wicket of Bobby Cross (14), before Lee Halliwell and Ahmed Matloob both struck in their first overs to leave Heywood's top three all back in the shed with 32 on the board. Matloob (4/53) and Breckin continued to take wickets - Heywood's captain Sean Burrill (41 from 28) gave his side a realistic hope of victory before he was stumped by Ben Gorton, and when Caleb Grant was caught by Ammar Baig the home side's chances had faded dramatically. Breckin (4/33) took the final wicket to leave Heywood 33 runs short of their target, completing the double over them for the Radcliffe Road men. (Scorecard)

The 2nd XI were in action on the road as well, at Stretford. The home side won the toss but were in early trouble at 9-3 after 9 overs thanks to an economical start from Matt Metcalfe and Mohammed Majid. Both the opening bowlers took 2 wickets, and there was 1 wicket apiece for Harry Williamson, George Mills and Zain Khan as Stretford reached 171-8 from their 45 overs. There was good contributions from the top 5, with a well paced 42 from Joe Mitchell, 23 for Zain Khan, 32* from Syed Hashmi and 21 for Patrick Potts - and the win was wrapped up with 5.1 overs remaining, by 5 wickets. (Scorecard)

The 3rd XI had a day that will hopefully not live long into the memory with a thumping 9 wicket defeat at home to Oldham West inside 2 and a half hours. Bury were in all sorts of trouble at 14-5 inside 9 overs. Sajad Safi (38) and Faiz Amjad (11) were the only two to make it to double figures, but Safi's contribution pushed Bury upto 84 all out before being bowled in the 22nd over. The 2019 1st XI Championship Cup finalists made very light work, with Muneeb Ahmed hitting 64* from 38 balls with the run chase completed in 10.2 overs. (Scorecard)