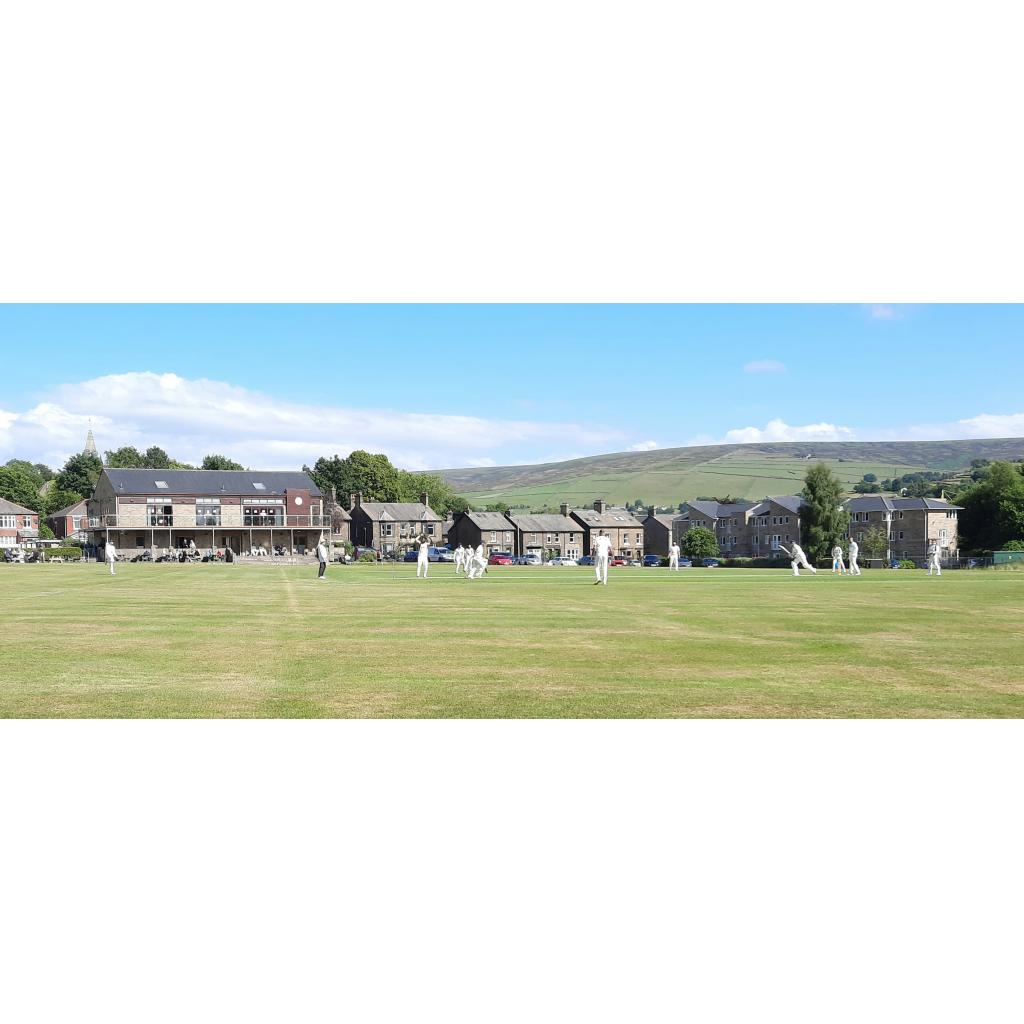 Patrick Potts reached his first senior century, and Scott Worswick ended the game with a hattrick in a 3rd XI friendly on Sunday, after the 2nd XI added another bonus point victory to the tally on Saturday.

The 1st XI were on the road at Glossop, where they won the toss and elected to bat. James Eyre’s excellent opening spell saw Bury struggling at 26-3. Opener Jacob Ramsay looked good for his 29 before he fell with the score at 60-4. Mukhtar Nasir (32) and Ammar Baig (36) steadied the ship and put Bury into a good position at 105-4 with around 16 overs remaining. However, the lower order couldn’t capitalise and Dominic Perrin took 5/44 from his 9 overs to bowl out Bury for 145.

Damario Goodman got an early run out when David Wilde went wondering out of his crease, and D’Angelo Springer got the wicket of Matthew Sonczak in his first over. Chris Gill batted patiently and remained at the crease when a heavy rain shower halted play at 84-3 after 24.4 overs. 6 further overs were lost, after 1 over a-side was lost during the first innings, with a revised target of 134. Ultimately, Glossop cruised to that score, with Gill batting through with 46* - a 6 wicket DLS win for the home side with 10.1 overs remaining. (Scorecard)

At Radcliffe Road, the 2nd XI also batted first against Swinton Moorside. The visitors started well with the ball, and had the wickets of each of the Bury top 4 within 19 overs at 52-4. Syed Hashmi and Patrick Potts came together for a 100 run stand, before Hashmi retired unwell. 3 quick wickets fell including that of Potts, but only after he had passed 50, and Hashmi returned to the crease to add to his total - eventually being bowled on 87 from 71 deliveries. Bury were all out in the 42nd over for 224.

A 50 opening stand for Swinton Moorside breathed life into the encounter, but the first wicket brought 3 more quick ones - Farrukh Ali Kayani taking 3 of the 4. Some lower order starts threatened to make a game of it, but eventually Bury would take the 10 wickets just in time to take the winning bonus point - 3 wickets also for Mohammed Majid and Matt Metcalfe with the away side 162 all out. (Scorecard)

On Sunday, the 3rd XI welcomed Tottington St Johns for a 40 over friendly. Another 50 opening stand came for Bury, the consistent Scott Worswick (31) with his captain Joe Mitchell (23). Number 3 Patrick Potts looked to be aggressive, and he put on an unbeaten stand of 114 from 76 balls for the 4th wicket with James Weston (31* from 28). Potts made it to 100 in the final over of the innings, finishing unbeaten on exactly a ton from 72 balls - Bury's overs ending on 219-3.

A frantic first 10 of the Totty St Johns reply saw 6 wickets and over 60 runs - 3 wickets for Adil Maqsood, and 2 for Uzair Fraz. Josh Lawson and Talha Latif bowled well through the middle overs - Lawson finally getting his reward in his 8th over when Mitchell caught Awais Bacha. Scott Worswick finished the game in style - bowling the numbers 8 and 10, and with all fielders around the bat, the number 11 gloved the hatrick ball to Lawson at gully to seal the hatrick with the score at 143. (Scorecard)